The UBC Okanagan Campus is located in the ecological setting of the Okanagan’s Very Dry Hot Ponderosa Pine Zone.

Mean annual precipitation (Kelowna Airport) is 298 mm, of which 102 mm (34%) falls as snow. High intensity rain tends to fall in the spring and summer seasons after the snow is gone. Approximately 25% of the campus has a high environmental sensitivity, representing primarily woodland and wetland ecological communities. With a diverse landscape of pine woodland and open grassland, the campus contains ecosystems and has plants and wildlife identified as being species at risk. Among those documented on campus are the Great Basin Spadefoot Toad and the Western Painted Turtle, which have been observed in certain rainwater features making maintenance more challenging and costly. Understanding potential changes to the Okanagan climate resulting from climate change will also need to be considered in planning the IRMP for the campus.

Trends for the Okanagan Region are expected to include increased annual temperature, increased annual rainfall (likely in shorter and more intense rainfall events), and decreased snowfall and snow pack leading to an overall decline in groundwater recharge and base flows during the summer. 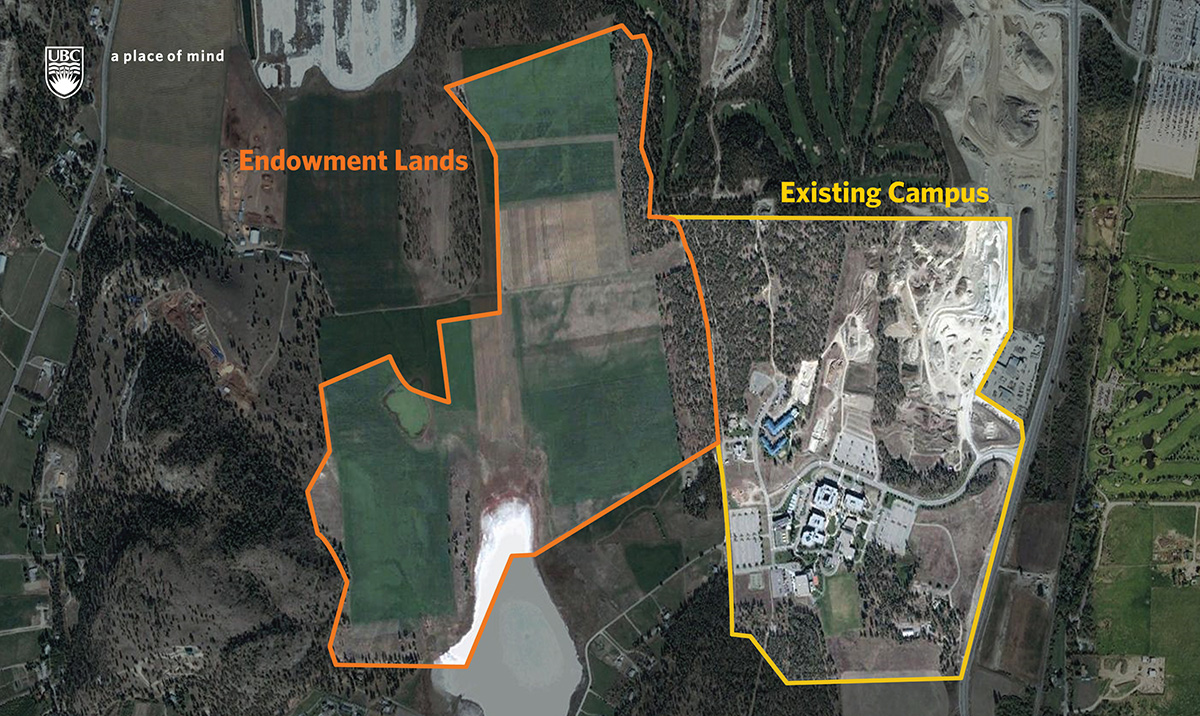 Positioned along the ridgeline, the campus has three distinct benches and slopes and several low-lying areas that have developed into rainwater retention areas and wetlands.

Soil conditions and permeability vary largely throughout campus. In general there is a coarse granular aquifer that is exposed in the lower elevations in Innovation Precinct, which is then capped with a thick layer of mixed silts, clays and cobbles in the higher elevations. In the highest elevations along the ridge is some bedrock. Hydrology has been extensively modified through historic development within the campus core. 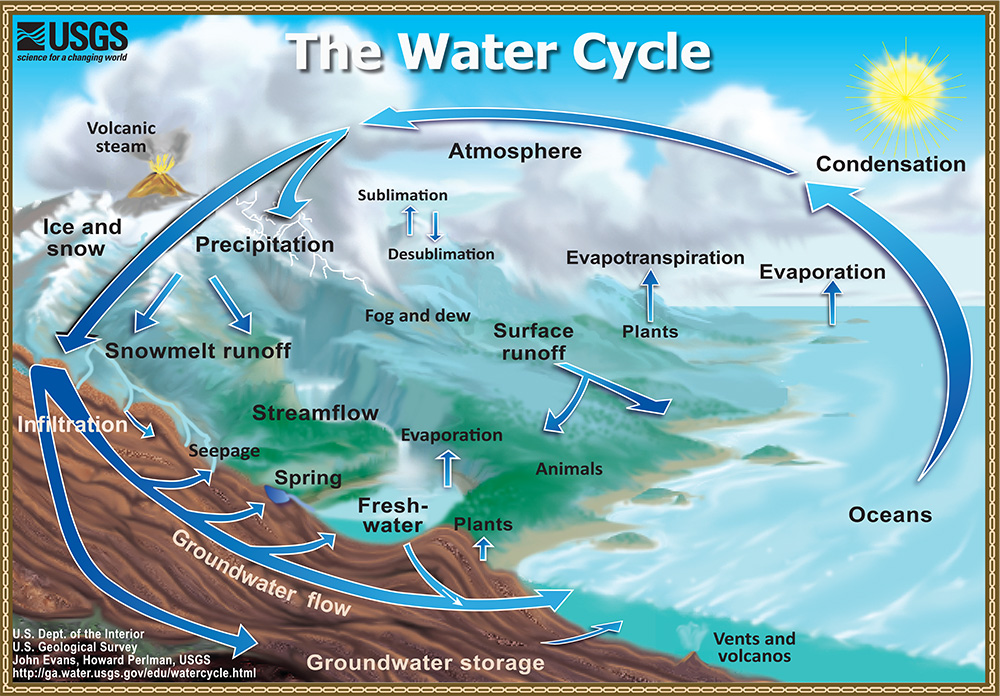 The Water Cycle image depicts the cycle of water movement of water on, in, and above the Earth. The water cycle on campus is impacted by many factors including rainfall intensity, permeability of surfaces and soils and the volume of water that can penetrate and infiltrate from the surface. Promoting infiltration in a dry climate is important to recharge groundwater supply. 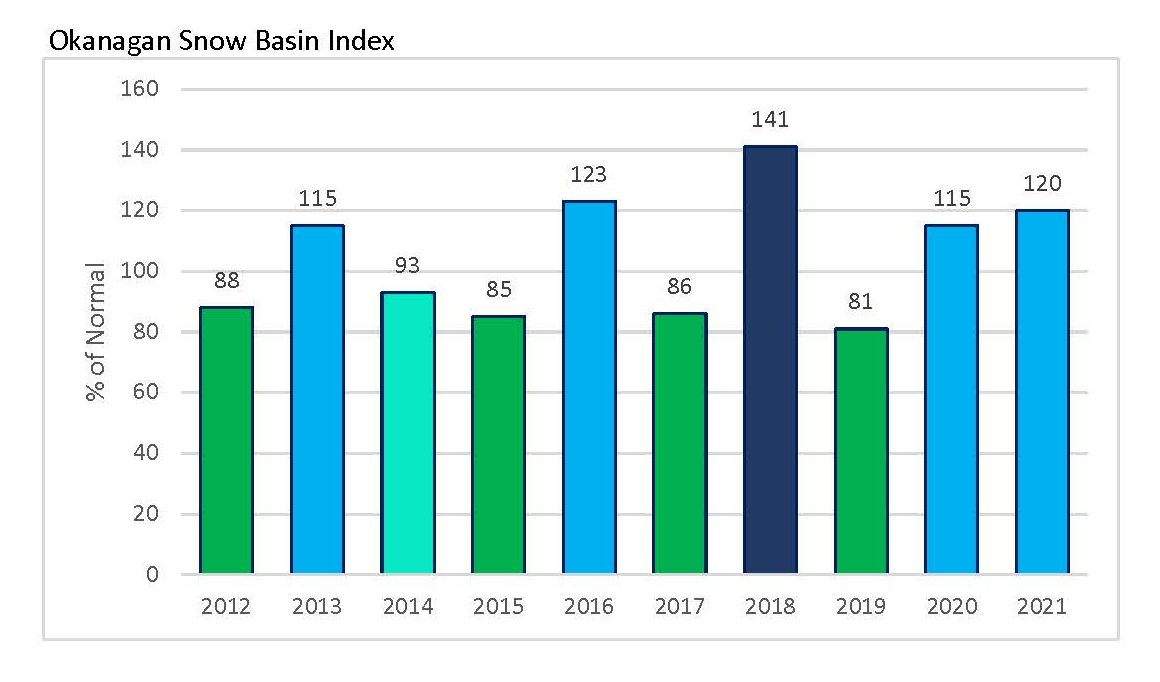 Several light to moderate precipitation events affected the province at the beginning of February. Arctic air spread across B.C. during the second week of the month, resulting in very cold and dry conditions. The latter half of February was punctuated by continual storm systems contributing additional mountain snow accumulation across all regions of the province.

Snow basin indices (SBI) for March 1st, 2021 range from a low of 102% of normal on Vancouver Island to a high of 204% in the Northwest (Table 1 and Figure 2). Overall, the province has above normal snow pack for March 1st, 2021, with the average of all snow measurements across B.C. increasing to 114% (February 1st: 111%). Regions with normal to slightly above normal snow pack (100-110%) include the Upper Fraser East, Middle Fraser, South Thompson, East Kootenay, Vancouver Island, and Peace. Above normal snowpack (110-125%) is present in the Nechako, North Thompson, Upper Columbia, West Kootenay, Boundary, Okanagan, Nicola, Similkameen, South Coast, Skagit, Skeena-Nass, Stikine and Liard. Regions with well above normal (>125%) snow pack are the Upper Fraser West, Lower Fraser, Central Coast and Northwest. The overall snow basin index for the entire Fraser River basin (e.g. upstream of the Lower Mainland) increased to 115%, from the February 1st index of 111%.